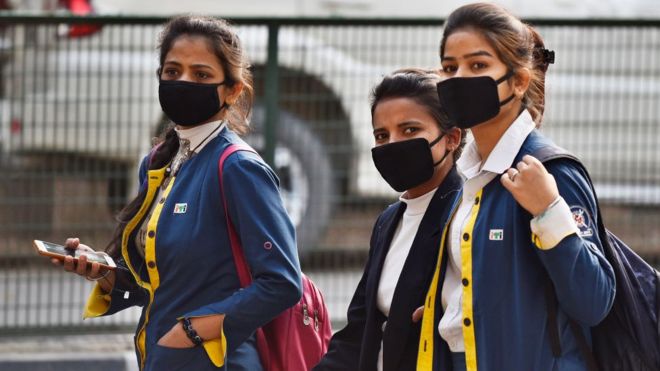 India has announced that all visas, barring a select few categories, will be suspended for a month in order to halt the spread of Covid-19.

Visa free travel afforded to overseas citizens of the country has also been suspended until 15 April.

The move is expected to impact tourism, hotel and aviation industries in what will be more bad news for the slowing economy.

India has 73 confirmed cases of the virus, the health ministry says.

This number is expected to grow in coming days, as the results for tests conducted earlier become available.

The advisory, issued on Wednesday night, says that only diplomatic, official, employment and project visas will be exempt from the current restrictions, which take effect on Friday and will be reviewed again in a month.

However, it has said that even those allowed in could be subject to 14 days of quarantine and has warned against “non-essential travel”.

India’s health ministry says it was among the first countries in the world to prepare for an outbreak of the respiratory illness.

However, there are concerns about whether the country will be fully equipped to prevent and treat an outbreak.

“It would be near impossible for India to force its citizens into mass quarantine and hospitalise people in numbers like China,” says the BBC’s Soutik Biswas.

All schools, colleges and movie theatres in the capital, Delhi, will be shut until 31 March in a bid to help control the spread of the virus, the city’s Chief Minister Arvind Kejriwal said on Thursday.

Several departments of the government have been coordinating India’s response to the outbreak. In a media briefing on Thursday, officials said there was no need to panic.

RR Gangakhedkar from the Indian Council of Medical Research (ICMR) said he was confident of India’s capability in managing the outbreak. But he added that there was no evidence that a rise in temperature will be helpful.

“We don’t have data to support the theory that the coronavirus won’t be as effective in summers,” he added.

“The NIV [The National Institute of Virology] can undertake more than 2,000 tests per day. But we have only tested 6,000 cases in the past one month or so. So we already have the capacity,” he said.

When asked about allegations that India has not been able detect coronavirus-related deaths, Mr Gangakhedkar said that “this is not true”.

“Our surveillance system is strong and we are able to quickly identify any symptomatic patients.”

He also said India, like other countries, was working on a vaccine.

“Coronaviruses are difficult to isolate. But our first step to isolate has been successful,” he said, but also cautioned that it will take more than a year before the “vaccine was ready for human trials”.

Meanwhile, officials in the southern state of Karnataka have invoked the provisions of a 123-year-old legislation to ensure that patients suspected to have shown symptoms of Covid-19 do not run away from being treated at hospitals or violate home quarantine norms.

The provision that has been invoked under the Epidemic Diseases Act 1897 says that any person or organisation or institution that violates the regulations will be prosecuted.

The state was prompted to enact the legislation after a passenger from Dubai, who was tested at the Mangalore airport and was found to have mild fever, ran away from a government hospital where he was taken for observation.

India’s leading domestic airline, IndiGo, has already said that it expects its quarterly earnings to be materially impacted because of the virus.

The auto industry, which is a key economic indicator, has also warned that production could be badly hit as 10% of its raw materials come from China.